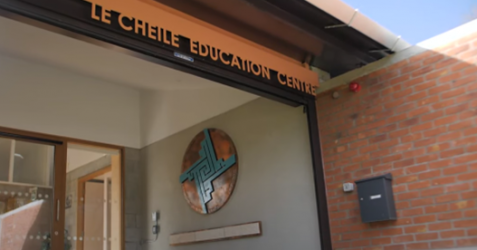 In recent weeks, the newly built Le Chéile Education Centre was opened.  The Le Chéile Schools Trust comprises the schools of fifteen Religious Congregations, including those of the Sisters of the Holy Faith.

While the Trust was established in 2009, and has had its offices at a variety of venues, it has now found its home at Bushy Park House, Templeogue, Dublin.

Representatives from the various congregations, along with other invited guests gathered for the event.  Sr. Rosaleen Cunniffe CHF, Congregation Leader, was present on behalf of the Holy Faith Schools. The music was led by school pupils from St. Mary’s Holy Faith School, Glasnevin, and Le Chéile Secondary School, Tyrrelstown. They were supported by Ciarán Coll (Teacher) and Sr. Marie Dunne CHF.

Eilis Humphreys (former CEO of the Le Chéile Trust) had the special task of ‘cutting the ribbon’ as part of the official opening of the new Centre. Marie Thérèse Kilmartin, the new CEO, thanked all who played a part in this wonderful occasion.

We wish the Le Chéile Education Centre every blessing in the future.

Joy of Giving in LA

Women Deacons? What Did the Pope Say?