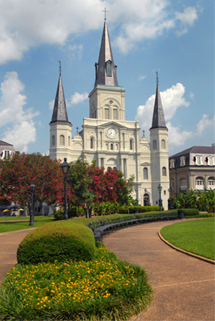 A hundred years ago Great Britain and the United States fought the Battle of New Orleans where a heavy defeat was inflicted on the British forces by the Andrew Jackson led forces. In 2015 a new Battle for New Orleans is under way. This battle is not a military engagement but a coalition of government, religious and other groups formed to reduce violence and racism.

New Orleans is a violent city with murder one of the chief crimes. Over 900 people are involved in about 50 gangs city wide. The United States incarcerates more people than other country in the world and Louisiana – which has the death penalty – incarcerates proportionally more people than any state in the USA. Holy Faith sisters are involved in several of the city initiatives aimed at reducing violence particularly with the families of murder victims and the families of the perpetrators.

Promoting racial harmony is an important ingredient in reducing violence but, of course, not all violence is racially related but some is and many groups exist to actively support good racial relations.  The Office of Racial Harmony of the Archdiocese is committed to to build a more loving, accepting and respectful community. They work with parishes, schools, and the diocesan agencies to bring about the change in hearts and minds  which is a pre-requisite for inclusion and appreciation of diversity. A Holy Faith sister is the parish and school liaison officer for this group.

Catholics in the diocese have placed this cause under the protection of Our Lady of Perpetual Succour or Our Lady of Prompt Succour as she is called in New Orleans. In many parish churches on Sundays a prayer of offered asking help ‘ in the battle of today against violence, murder and racism’.